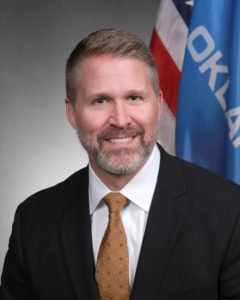 Prior to joining CLO, Secretary Chambers founded The Aurelian Companies, a multi-industry group of investment companies. Preceding the launch of his own group of companies, Secretary Chambers was appointed Chief Executive Officer of White Star Petroleum, LLC in February 2016, before that serving as Chief Financial Officer of American Energy-Woodford, LLC, American Energy-Nonop, LLC and American Energy-Minerals, LLC. Previously, he worked for Chesapeake Energy Corporation for seven years in increasing roles of responsibility, most notably as Vice President and Treasurer. Prior to Chesapeake, Secretary Chambers worked in New York City for Colgate-Palmolive Corporation, Prudential Financial, Verizon Communications, and Ernst & Young in various finance, treasury, and accounting roles.

The Commissioners of the Land Office owns and manages over 750,000 acres of land in Oklahoma, making the agency the second largest owner of real estate in the state.  More than 1,100,000 acres of minerals provide great opportunity for the trust to expand in size and provide funding to schools. In addition to lands granted at statehood, the CLO has invested in commercial real estate including office buildings and industrial facilities that are currently valued at approximately $100 Million.  The Land Office also has permanent trust investments valued at over $2.4 billion.  The CLO provided $126,969,109 to the state school system during the 2019-2020 fiscal year.